John Obadiah Westwood (1805–1893) is best known for his scientific contributions to entomology, the study of insects. 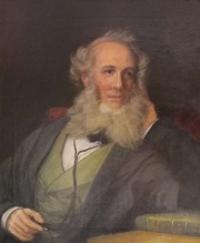 He played a key role in the founding of the Entomological Society of London in 1833, and was also the University of Oxford’s first Hope Professor of Zoology, named after one of the founding collectors of the Museum, Frederick William Hope.

Westwood was early to recognise the utility of insects to practical pursuits, which is known as 'economic entomology'. One way he promoted the study of insects was through his work as a contributor to the Gardeners’ Chronicle, a popular magazine devoted to horticultural news.

Penning features printed in the periodical for over 50 years, he primarily wrote articles outlining the effects certain insects had on plants and crops, both beneficial and detrimental. These articles were often reworked from his more academic works, making them easier for the layman to understand, while still providing readers with the latest findings of emerging science.

Westwood was based in the Museum for 30 years and looked after its growing and impressive collection of insects. The Hope Collection remains one of the largest collections of insects in the country, and includes an impressive library and archive of material related to the discipline of entomology.