Scientists have shown for the first time that brittle stars use vision to guide them through vibrant coral reefs, thanks to a neat colour-changing trick.

The international team, led by researchers at Oxford University Museum of Natural History, described a new mechanism for vision in the red brittle star Ophiocoma wendtii, a relative to sea stars and sea urchins, which lives in the bright and complex reefs of the Caribbean Sea. Their findings are published in Current Biology today. 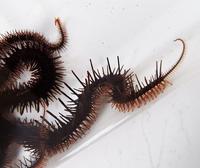 This species first captured scientific attention more than 30 years ago thanks to its dramatic change in colour between day and night and its strong aversion to light. Recently, researchers demonstrated that O. wendtii was covered in thousands of light-sensitive cells, but the exact behaviours they control remained a mystery. The new research shows that O. wendtii is able to see visual stimuli, and that its signature colour-change might play an important role in enabling vision.

Lauren Sumner-Rooney, a research fellow at Oxford University Museum of Natural History who studies unusual visual systems, has been working with Ophiocoma for several years at the Smithsonian Tropical Research Institute in Panama and the Museum für Naturkunde in Berlin. Alongside team members from the Museum für Naturkunde, Lund University, and the Georgia Institute of Technology, Sumner-Rooney ran hundreds of behavioural experiments to test the brittle stars’ ‘eyesight’.
“These experiments gave us not only the first evidence that any brittle star is able to ‘see’,” says Sumner-Rooney, “but only the second known example of vision in any animal lacking eyes”. 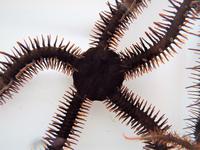 The animals were able to seek out areas of contrast, which the researchers think may mimic structures that could offer shelter from predators. Although it appears that their vision is very coarse, on the crowded tropical reefs disturbed brittle stars never have to look too far to make a dash for the nearest cover.

However, an unexpected discovery raised new questions about how this visual system worked. “We were surprised to find that the responses we saw during the day disappeared in animals tested at night, yet the light-sensitive cells still seemed to be active,” says Sumner-Rooney.

The team set about trying to identify what caused this dramatic shift in behaviour, eliminating possible factors such as loss of motivation and low light intensity making vision too difficult. The one they couldn’t rule out was O. wendtii’s characteristic change in colour, from a deep red during the day to beige at night. Previously, Sumner-Rooney’s team showed that another closely related brittle star, Ophiocoma pumila, was also covered in light sensors, but it doesn’t exhibit the same colour change. Curiously, this paler species also failed their eye-test.

Combining a suite of techniques, the researchers reconstructed digital models of individual light-sensing cells in the two species, with and without O. wendtii’s dark daytime pigmentation. They demonstrated that, during the day, the pigment restricted light reaching the sensors to a narrower angle that corresponds to their hypothesised visual resolution. Without this pigment – in O. pumila, or during the night in O. wendtii – light could reach the sensors from a much wider angle, making vision impossible.

“It’s a very exciting discovery,” explains Sumner-Rooney. “It had been suggested 30 years ago that changing colour might hold the key to light-sensitivity in Ophiocoma, so we’re very happy to be able to fill in some of the gaps that remained and describe this new mechanism.”

Although this is the first visual system proposed to work using whole-body colour change, the scientists have also identified potential similarities with a sea urchin, distant relatives of brittle stars. Only one species of sea urchin has ‘passed’ the same tests for vision, and it also, independently, changes colour in response to light levels. Future work will probe whether this sea urchin, the only other animal in the world known to see without eyes, might be using a similar trick to Ophiocoma.